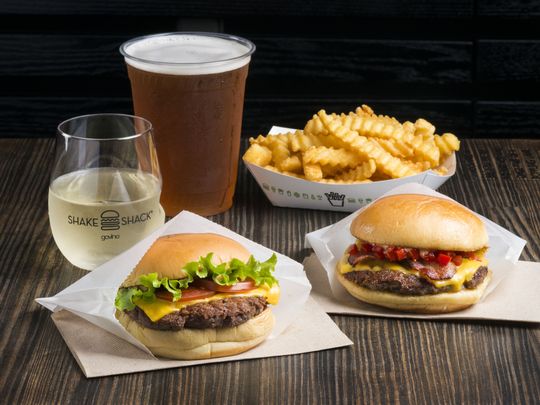 The first Shake Shack in Arizona opened up today, Feb. 26th, at Scottsdale Fashion Square Mall.  It’s located on the ground floor, in the spot Modern Steakhouse used to occupy at the east end of the mall.

Another Shake Shack will be opening soon in the center courtyard at Kierland Commons, between The Greene House and Zinc Bistro. But first, after Scottsdale Fashion Square, the chain will be opening a Phoenix location at Uptown Plaza at Camelback and Central, in the former Boston Market.

One unique feature to this burger and milkshake place is that beer and wine from local breweries will also be served.  There are also wood planks on the wall designed to look like Camelback Mountain.

The franchise also servers up frozen custard.  In fact, you can go to their website to look up featured flavors for the week.

Information from Shake Shack’s website, “Shake Shack is a critically acclaimed, modern day “roadside” burger stand known for its 100% all-natural, antibiotic-free Angus beef burgers (no hormones added ever), griddled-crisp flat-top dogs, fresh-made frozen custard, crispy crinkle cut fries, and more.  The Scottsdale Shack menu will have all the Shack classics, as well as select frozen custard concretes featuring local purveyors. The Shack will have its own exterior entrance as well as access from inside the shopping center.”